One of the best things about modern cloth diapering, to me, is the diaper sprayer. Those things are HANDY! There can be a big learning curve on those, however, and you likely will end up splattered (with at least water) at some point in your cloth diapering adventures.

Spray Pal was created for just that: keeping your bathroom (and you!) splatter-free.

I have to admit, I was very skeptical of the Spray Pal. All I could think of was it was another (dirty) item I would have to keep away from my toddler, and it wouldn't be worth the hassle of trying to store it. My husband, however, pretty much demanded one as soon as he heard of it. He was sick of the water spraying him a bit. 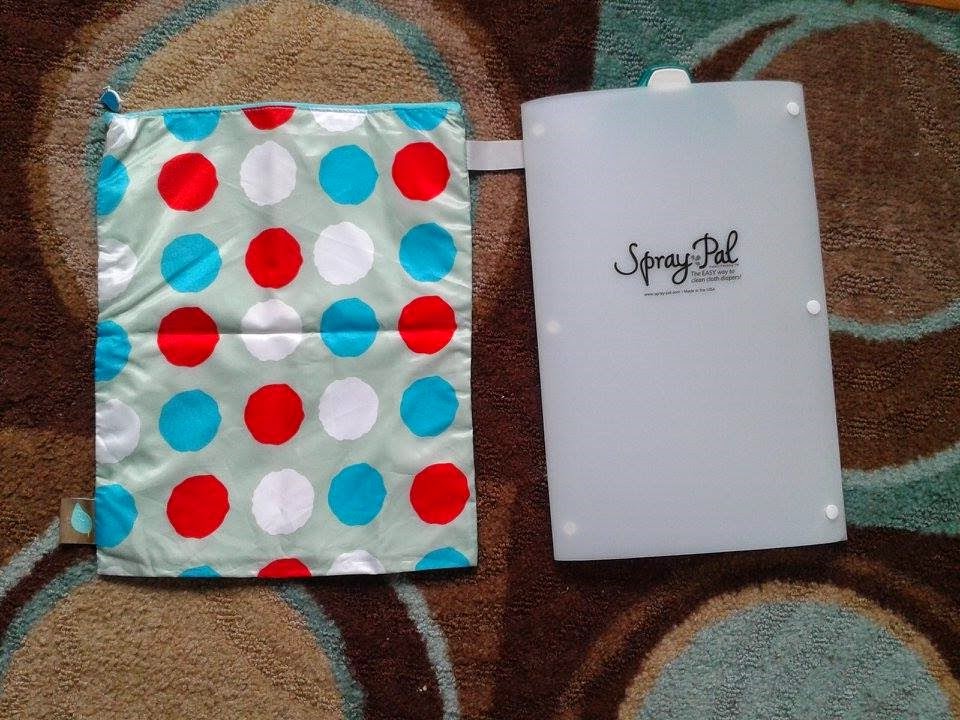 Spray Pal was generous enough to send us both a Spray Pal and a Jaq Jaq Bird wet bag for storage. STORAGE. Yes, I was excited. That was my area of concern!

My husband happily tried out the Spray Pal first, but ended up not using it because the poopy diaper was just "too massive" and he needed to get better angles or something like that. I have tried out the Spray Pal on a variety of diapers with different materials and features. I tried it on various pockets (some with inner gussets, some without), various covers, and various flats and prefolds. I also used it on wipes.

What I've found is that, while it does eliminate the splatter, I can't get certain pockets (ones with double gussets) clean enough to my liking. This isn't to say that they aren't good enough to go in the wash, but I've always been a little OCD with spraying out my diapers and like to get as much as possible off. Instead of a quick spray down and in the bag, I have been known to stand over a diaper for 5 minutes to get as much as possible off. Soooo, take that with a grain of salt. 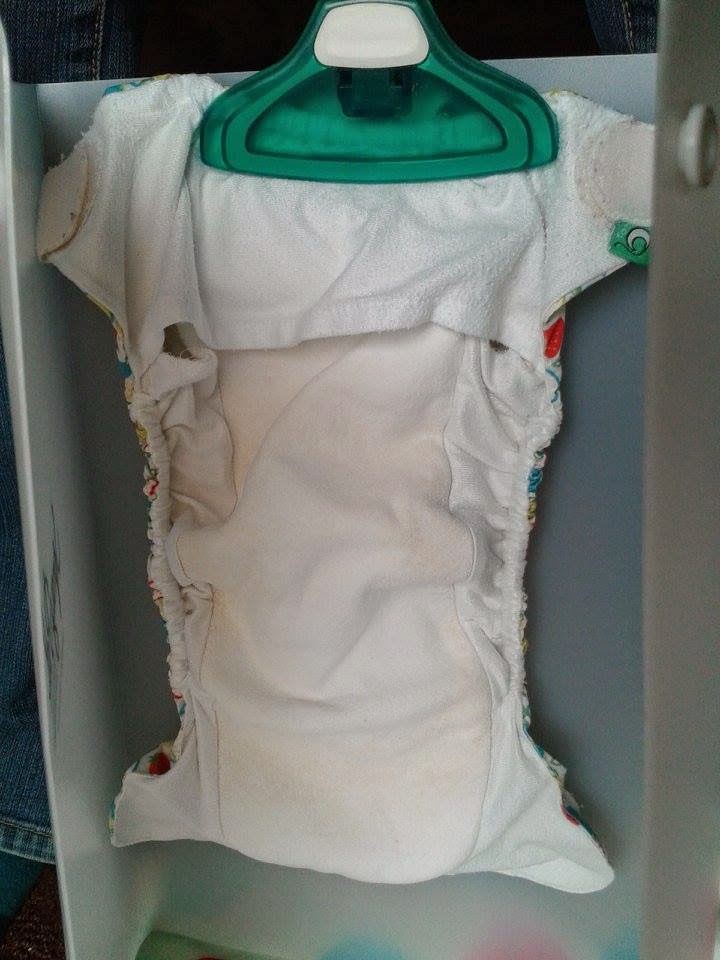 Still, I like being able to put my hand behind the diaper itself, spread out my fingers (think of if you had a webbed hand how it would be spread out) and then spraying the gussets (which are now completely stretched thanks to my hand) to get all poo specks off. I just can't do that with a Spray Pal.

I ended up finding that I absolutely love it for the flats, prefolds, and wipes because those are flat anyway and I never have to "spread out material" to clean as I like. I don't like using it for pockets, covers, fitteds, or AIOs. 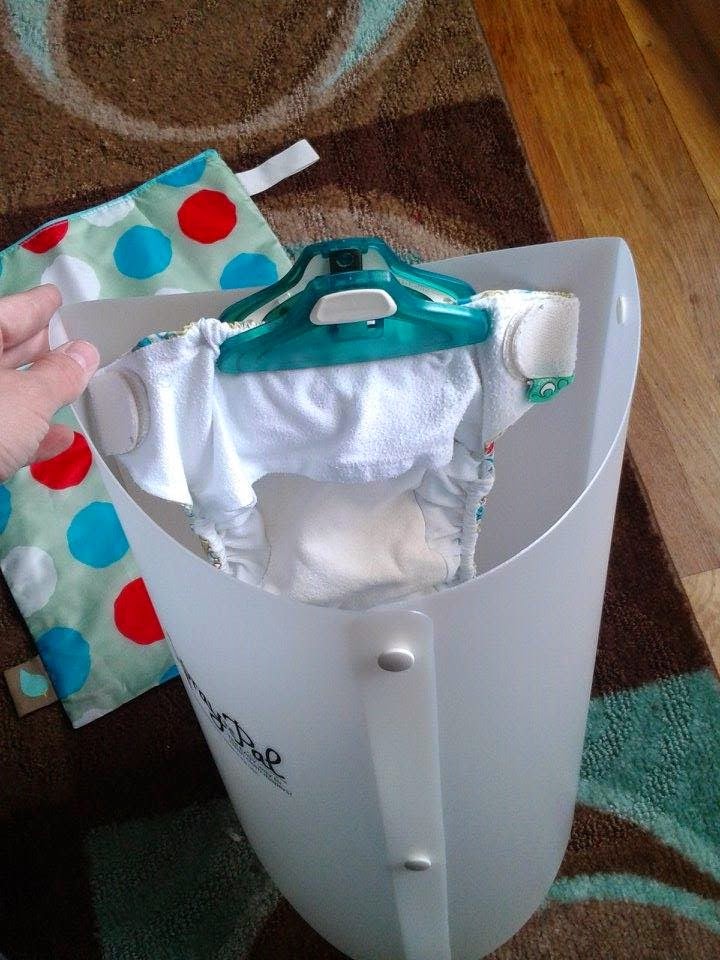 There is an exception, of course, as there are with many things. I still will sometimes USE the spray pal with the items I said I don't like using it on if it is a huge poop or a more stuck on poop. While I can't get the "clean" I want, I can spray and let the poo loosen up a bit without getting splattered.

THE SPRAY PAL TOTALLY DOES THE JOB WITH SPLATTER.

Seriously, the toilet doesn't have sprayage, nor do my legs or feet. That's awesome. Had I not been cloth diapering for 3 years prior to trying out the Spray Pal, this might be a different review. If I were a new mom, this thing would probably be my favourite accessory (aside from the sprayer itself). 3 years into this and I've already got my groove/routine with spraying diapers without anything more.

The Spraypal fits PERFECTLY in the Jaq Jaq Bird bag, too. It eliminates splatter and it really does store easier than I thought. I just put it in the bag and slipped it between the toilet and sink. 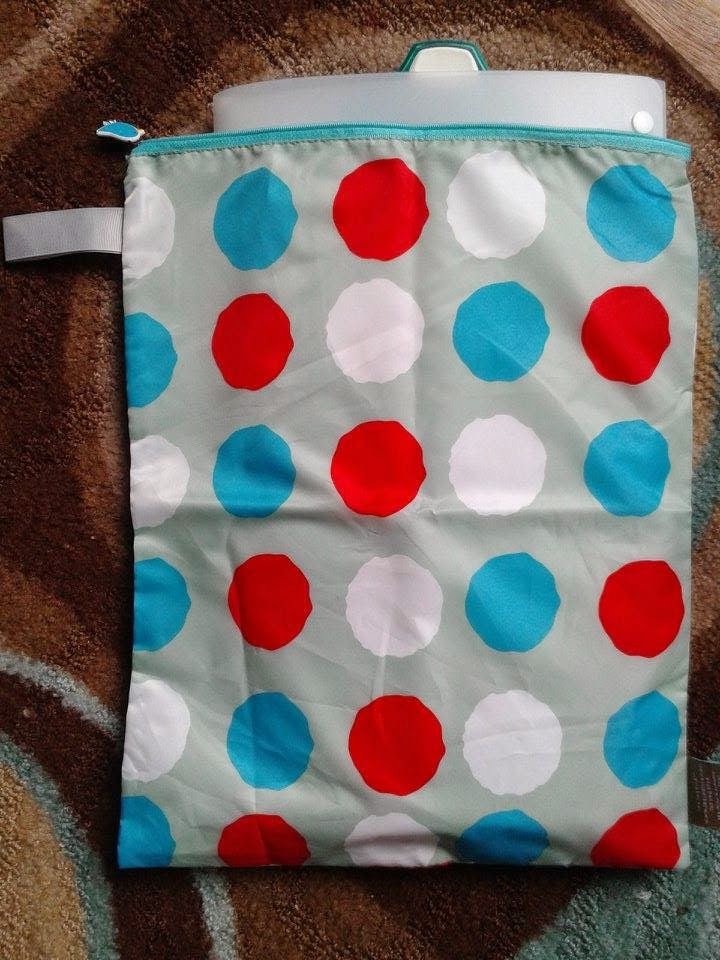 Overall, I think the Spray Pal is a great accessory, I just don't think it's for us. I definitely think it would be a great item for a family newer to cloth that isn't "set in their ways" like us!

If you're sick of getting misted, sprayed, or splattered, try out the Spray Pal! You can buy a Spray Pal and Jaq Jaq Bird bundle for $39.50 here, or enter to win one below!

Disclosure: Thoughts Of Fluff received these items in exchange for a review. This did not influence my opinion of the product in any way. My opinions are my own and may differ from those of your own. Thoughts Of Fluff is not responsible for prize fulfillment.
Posted by Christine at 12:00 PM