I had never made barley in my life before trying this recipe, so this was definitely an experiment for my family. In fact, I don't recall ever EATING barley in my life. I'm sure I've had it in a soup or something, but I'd never really had it to where I remembered it. I had no idea what it would be like, or how well I would make it. Still, it sounded tasty, looked simple, and easily could be a low sodium dish. 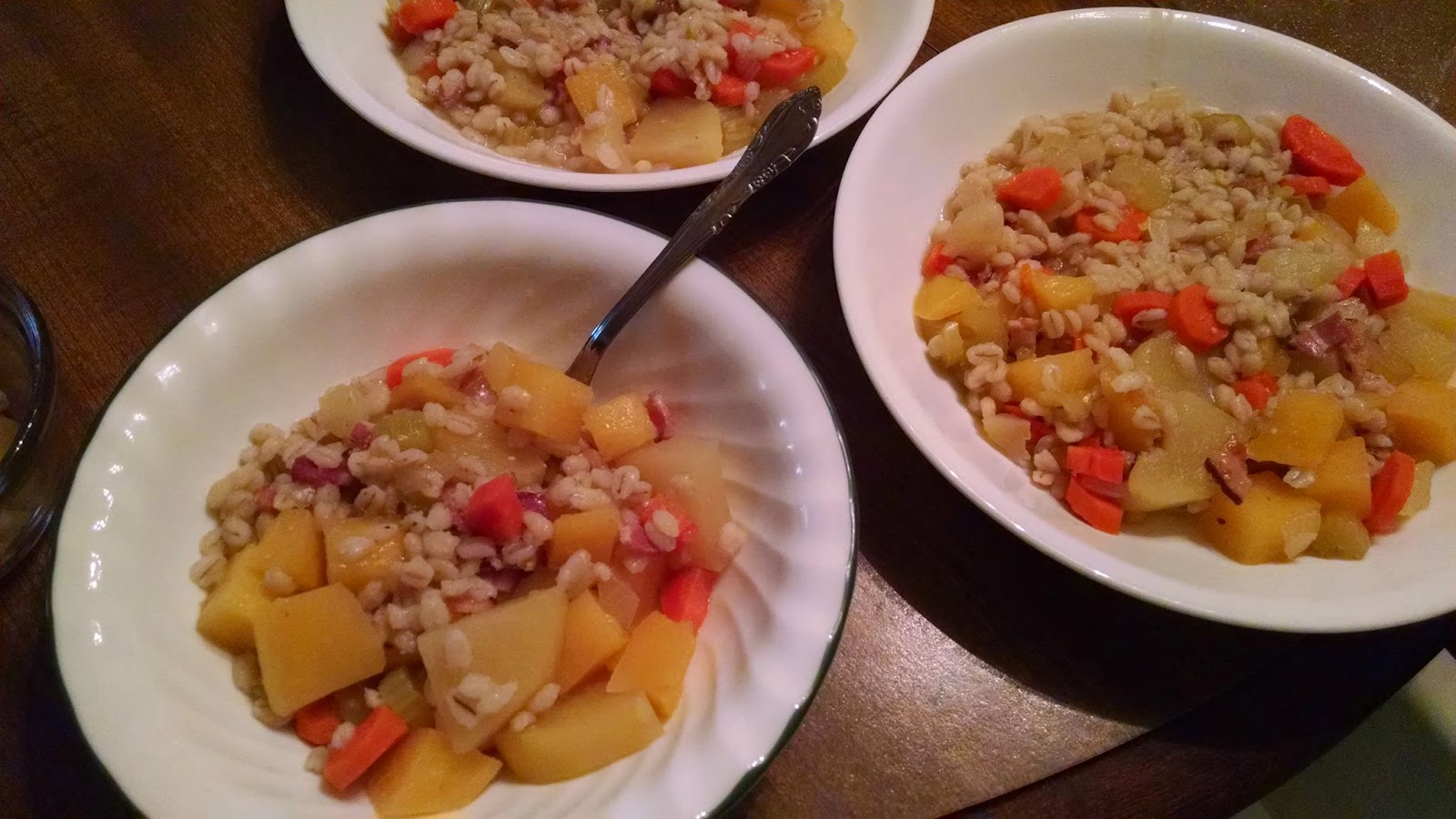 I don't have a kitchen scale, so I just eye-balled it. I also had no idea how much 8 ounces of cut rutabaga and 8 ounces of cut potatoes would look like. In fact, I'm most certain that I didn't have the "correct" amounts of them in there. This dish claiming to serve 4 people should fit in my 3QT pan, so I had a rough idea. The pan was to the brim, so I definitely went with the larger pan the second time around. 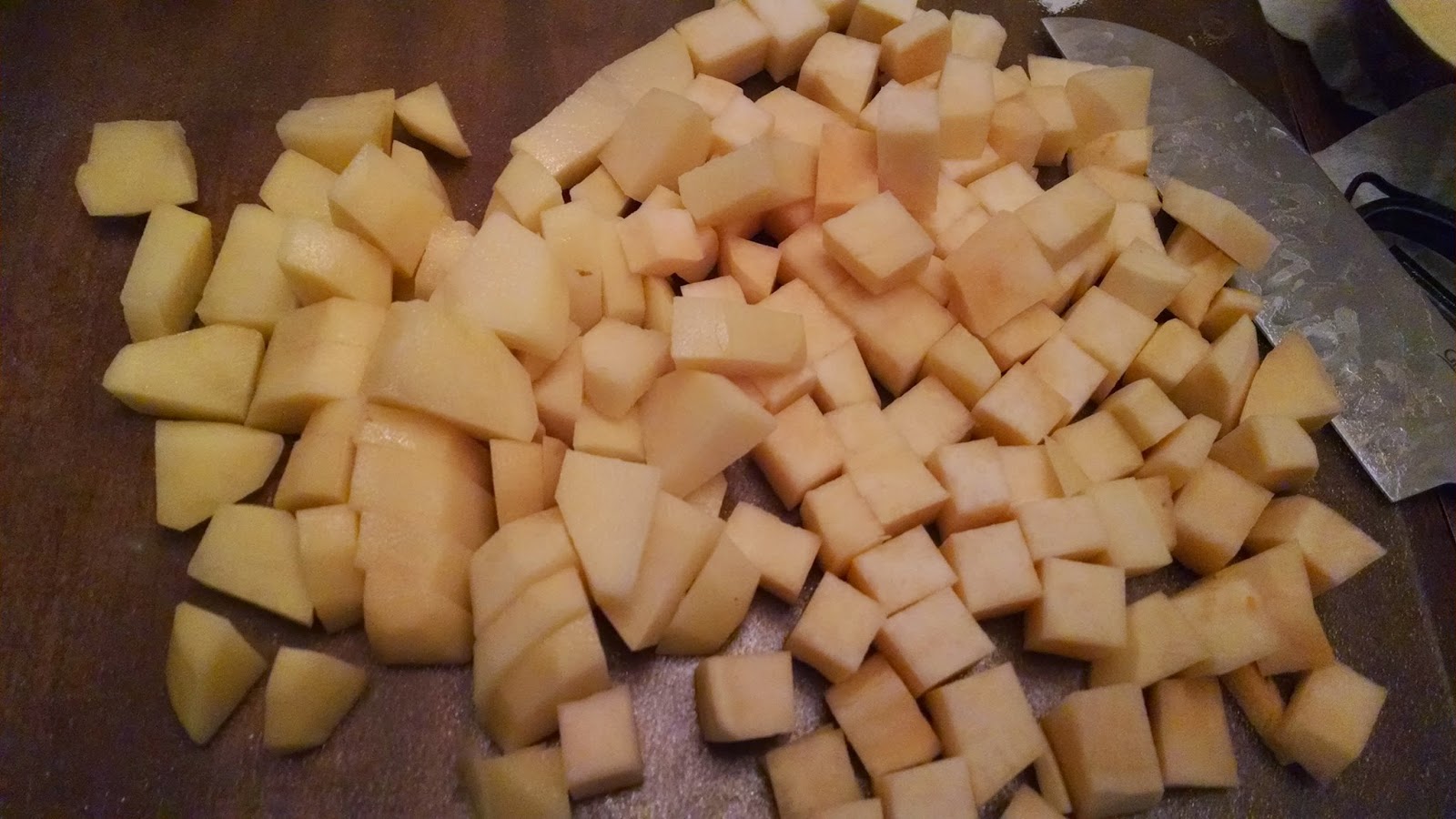 The meal turned out well. Inexpensive, easy prep (just chopping a few things), super easy to make, and hubby even said, "...this isn't what I expected. It's DELICIOUS, just not what I expected!" before I even had one bite. 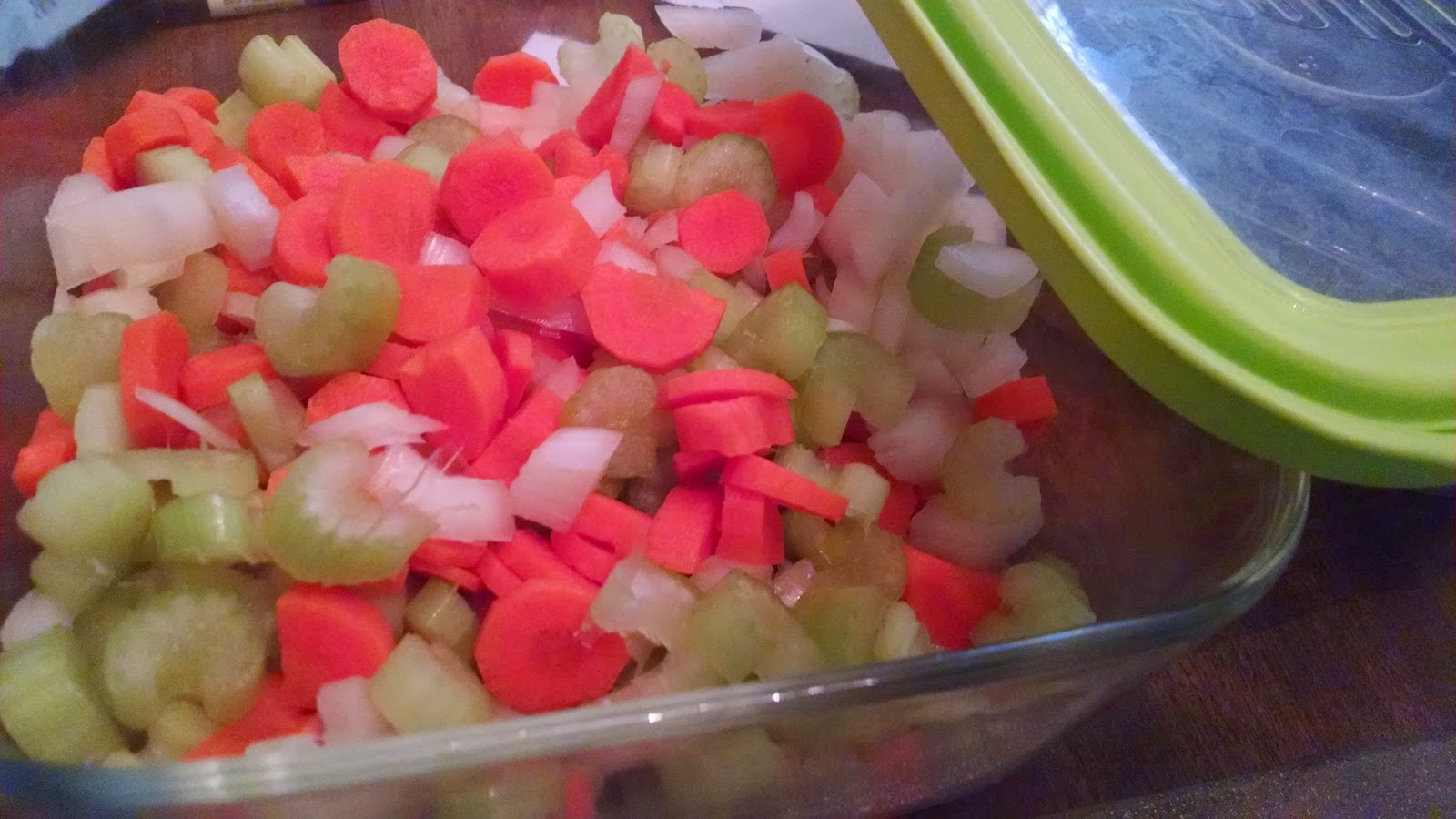 It was delicious, actually. Very delicious. I was surprised, as there wasn't really any spice in it to flavour it, but it was a good flavour. It would be good with cut up mushrooms in there, too. If you like mushrooms, that is. It was so delicious, actually, that both children LOVED it!

This is a FABULOUS cold-weather meal.It would be great accompanying a variety of meats, though the second time around I put in 4 slices of (finely crumbled, cooked) bacon. I used the Aldi uncured bacon brand "Simply Truth", which has 65mg/slice. This is the lowest sodium bacon I have found anywhere. There was no salt added to the veggie stock since I make my own, so the overall sodium for this entire dish was roughly 300mg, 560mg with the added bacon. Keep in mind that the sodium content will be altered by using store-bought stock, and by how much of particular vegetables you add. I googled the nutritional information for each veggie I used to get a rough idea of the sodium content they added.

This is another recipe out of my Russian, German & Polish Food & Cooking

Braised Barley and Vegetables
Serves 4
Ingredients
Instructions:
1) Put the barley in a measuring cup and add water to reach the 2 1/2 cup mark. Let soak in a cool place for at least 4 hours or, preferably, overnight. (Below is when I first put it in to soak that morning, and when I took it out to use that afternoon) 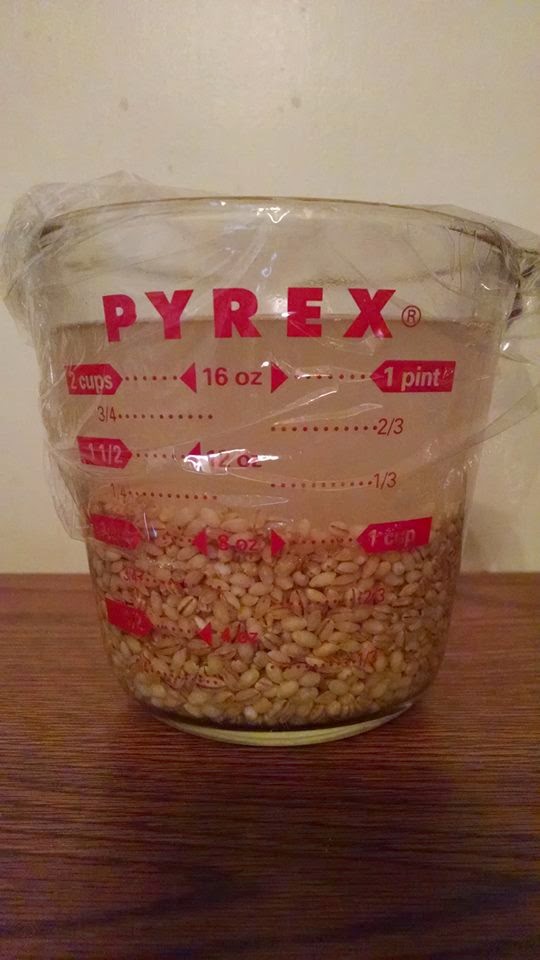 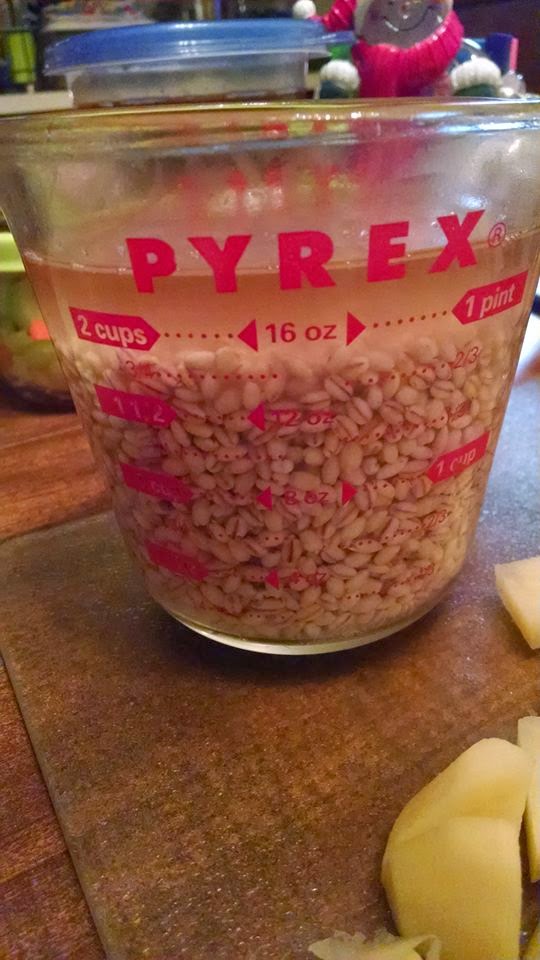 2) Heat the oil in a large pan and saute the onion for 5 minutes. Add the sliced celery and carrots and cook for 3-4 minutes, or until the onion is starting to brown. 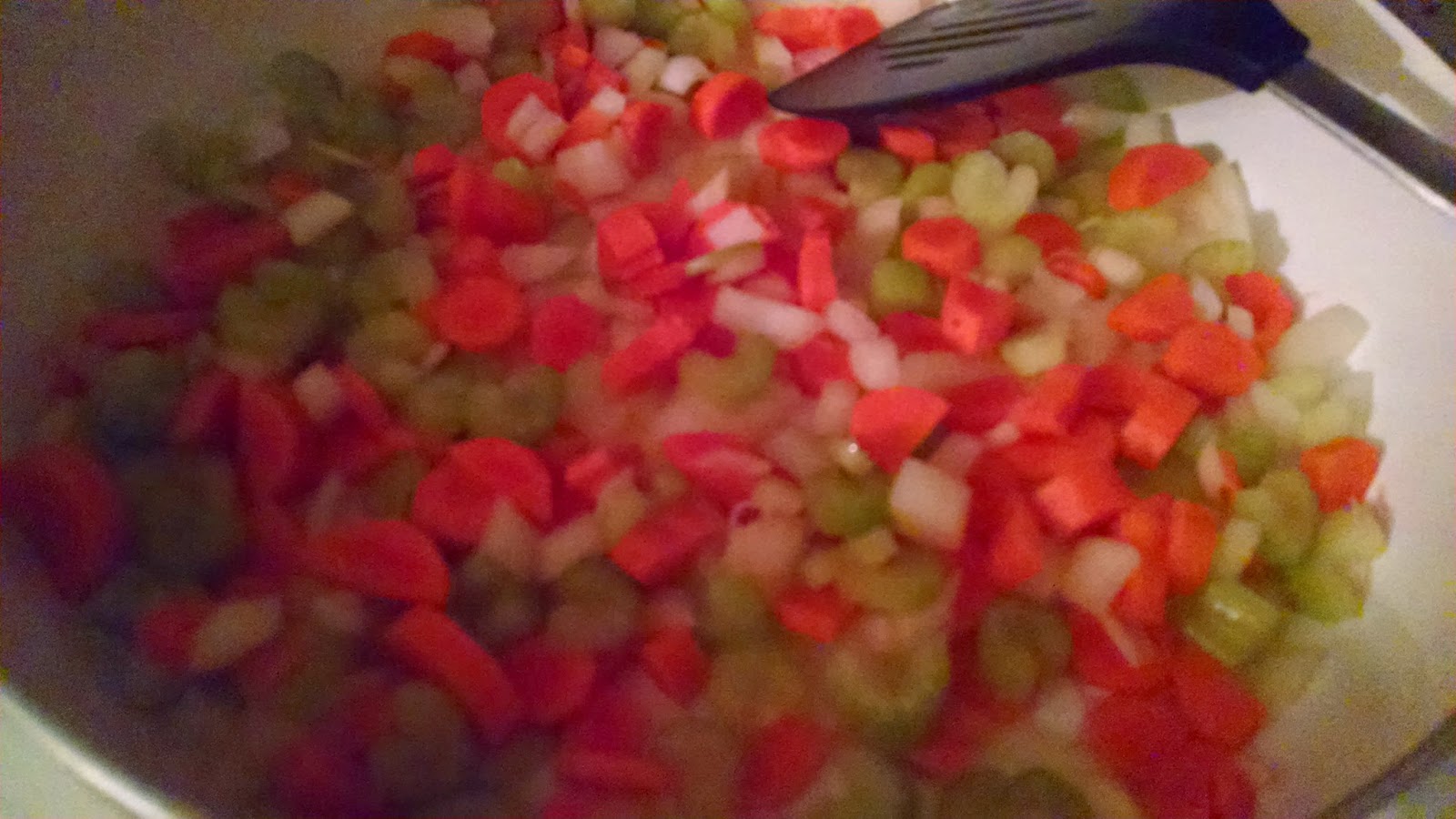 3) Add the barley and its soaking liquid to the pan. Then add the rutabaga or turnip, potato and stock to the barley. Season with salt and pepper. Bring to a boil, then reduce the heat and cover the pan.

4) Simmer for 40 minutes, or until most of the stock has been absorbed and the barley is tender. Stir occasionally towards the end of cooking to prevent the barley from sticking to the base of the pan. Serve, garnished with celery leaves.

Disclaimer: Thoughts of Fluff was not compensated for this post. All opinions are my own and may differ from your own. Post contains affiliate links.
Posted by Christine at 6:00 AM