Pokémon Go became a huge sensation as soon as it was released. I don’t need more things to distract me or occupy my time, but I have noticed that when I go out with the family that Bobble is reluctant to do things. Squiggle wants to hike and walk, Bobble just wants to go home. Sometimes he evens asks to just go home so he can play video games.

This is disappointing for me, as he really doesn’t get to play video games very often. Sometimes not even at all in a whole week. I finally succumbed to the Pokémon Go fad because I thought that if it would get him to stop complaining when we were out and about, it might be worth it. Also, it's free.

I tested it out to get an idea of how you play the game while the kids were asleep, catching a few Pokémon in our house and learning the very basics. I even saved Bobble's life that night. Obviously. 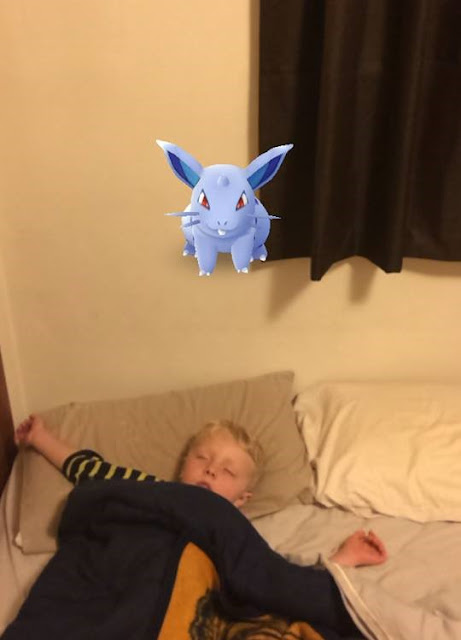 The next day I took them for a walk downtown to catch Pokémon. They fought over who got to hold the phone, and it wasn’t very fun because the fighting escalated into tantrums.

I tried again the next day, walking around the neighborhood with them. This time, I turned the volume on the game up (I had it on silent and it would vibrate when a Pokémon appeared) and put it in my pocket. I told them that when there was a Pokémon, I’d let them know, and they would take turns. That worked much better.

Now they know that I hold the phone no matter what. We walk, and I let them know who gets to catch the Pokémon (they alternate) and who gets to spin for items at the Pokéstops (they alternate for these, too). If I have the volume off so it just vibrates, sometimes I don’t pull the phone out hardly at all, and the kids just happily walk with me. Bobble occasionally will ask if there is a Pokémon or Pokéstop near, and sometimes I’ll pull the phone out and look with them. As it stands, however, they (mostly Bobble) accept I’ll just tell them when it’s time to catch something, and we now get to enjoy walks without as much whining.

Disclaimer: Thoughts of Fluff is responsible for the contents of this post. All opinions are my own and may differ from those of your own.
Posted by Christine at 6:00 AM