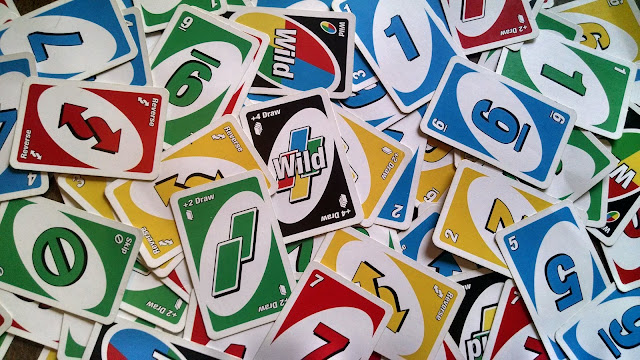 One game that has gotten a lot of play recently has been UNO. Bobble loves this game, and it has been fun for involving other family members. UNO is recommended for children age 7 and up, and you can play it with 2 – 10 players. Bobble is just now 5 years old, but I think any child that knows their numbers and colours can play if you don’t play super competitively (at least to start out).
If you haven’t played UNO, the goal is to go out of cards first. You start with a set number (varies based on number of players), and you lay down cards one at a time, matching by colour or number. There are special cards like Reverse, Skip, Draw Two, Wild, and Wild Draw Four. When you get down to one card you have to say, “Uno”. If you lay your second-to-last card down and don’t say “Uno”, you have to draw two cards (if someone else notices).

We didn’t make Bobble draw cards for not saying “Uno” at first, but we would make other players draw. He caught on to calling other people out for not saying “Uno”, and we would prompt him when he was down to one card. After he got pretty good about calling “Uno” without us reminding him, we told him that we were going to start making him draw cards for not saying “Uno”, just like everyone else has to. We started by counting to 5 slowly in our heads before we told him to draw two cards, and we also didn’t continue play and looked at him, waiting. This let him know there was something more he should do. As he got really good at that, we would just pause for a second and see if he would say anything before he was forced to draw. Now we just make him draw. It took probably 2 weeks before we got to the point where we would just make him draw if he didn’t say it immediately. Now he tends to say “UNO!” as he’s placing his second-to-last card. He knows. J

This game has been helpful in encouraging Bobble to think about alternate plays. It took a little while for Bobble to catch on to using the cards to strategize, but he caught on to the matching colour right away. We helped him a lot with which cards were best to play at first, and explaining why, or we would play and he would help us lay cards down (and we’d explain why we played that card).
One thing that was hard for Bobble to catch on to was the order of turns after a reverse was played. When you’re just play with two people, it essentially acts as a skip since you’d just get to go again. When you play with more than two people, the order of play actually goes the other way. This confused him at first, but he caught on after a few times.

Another thing that he had trouble with was figuring out how to play cards in his favour (versus just doing whatever he wanted or could do). An example of this would be playing a wild card and naming the colour yellow when he only had one yellow card, but 4 blue cards. This was probably the hardest concept for him, actually. He would have a yellow Draw Two card, but that’s it, and he’d change it to yellow, then play his Draw Two, and have no other cards to play and end up drawing. He’s getting better at this, but he still hasn’t mastered the skill.

The difference between the Wild and the Wild Draw Four cards confuses him a bit sometimes, too. A Wild card can be played at any time during the game, regardless of whether you need to play it or not. A Wild Draw Four can only be used when you have no other options. If you play a Wild Draw Four when you have that colour or that number in your hand, you could be forced to draw cards if someone challenges that play. We haven’t introduced the challenging to Bobble, but we do make sure we ask him if he has anything that colour or any of that number because he can’t play that card otherwise.

You can keep score in UNO, but we also haven’t introduced that concept to him yet since he hasn’t fully grasped the concept of playing whatever is in his best interest. If your children are older, you can always incorporate scores into the mix. I think we won’t be doing that for a while.
This game is great for colour and number recognition, though younger children will need more reminders and instruction with special cards. UNO can be found at most retail stores, and is about $6.

*Please note that newer version of UNO have different graphics on the cards. Our version is older.

Disclaimer: Thoughts of Fluff is responsible for the content of this post. All products were purchased by me, and all opinions are my own and may differ from those of your own.
Posted by Christine at 6:00 AM