Broccoli cheese soup has always been one of my favourite dishes, but I had never tried to make it until the recently. I had been searching for a good recipe, and finally found one close to what I wanted. A few alterations later and voila! Broccoli cheese soup! 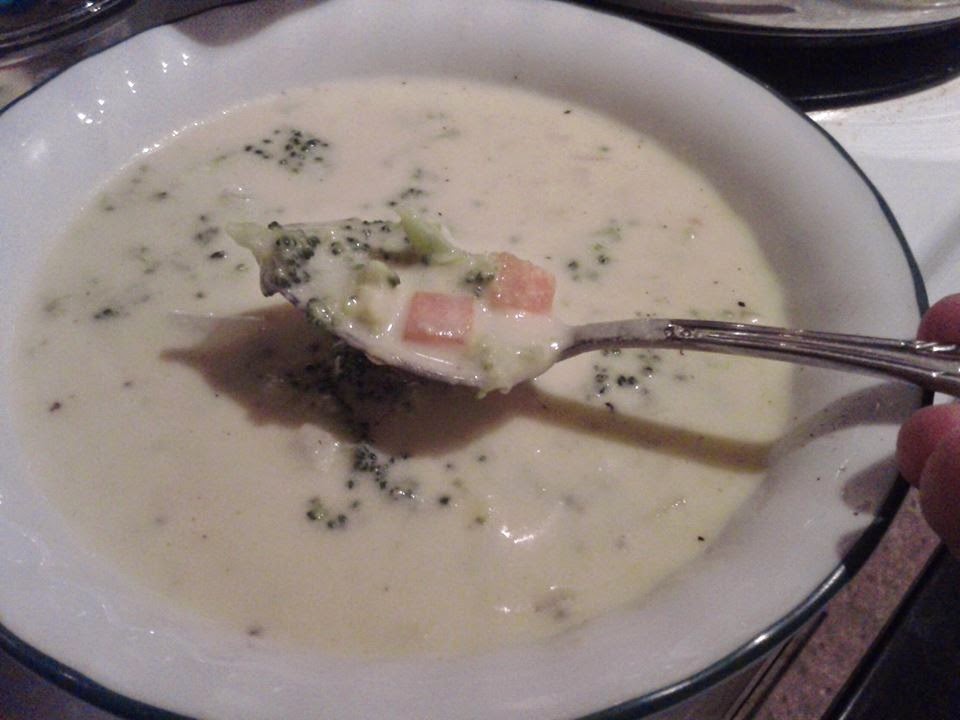 The majority of the time spent on this dish is the prep time. If you prep your veggies before hand, this is a super easy meal.

This meal is not one I would consider to be "low sodium", but it is low enough to where Bobble could still eat it without worry of nearing his daily allowance. It is definitely low sodium compared to store-bought broccoli cheese soup (campbells has 1,640mg sodium in one cup, but the can is 1.25 cups, so that can has 2,050mg of sodium) or restaurant soup (AppleBees has 1,490 mg of sodium in one cup)!

All sodium content will vary depending on the brand and amount of ingredients used, but the two main sodium-laden ingredients would be chicken broth/stock that is store bought, and the cheddar cheese. Noah Brothers makes an organic chicken broth (low sodium) that is 140mg per cup, though I'd recommend just making your own with leftover chicken bones and not adding any salt.

Assuming you used store-bought broth/stock, the recipe will be approximately 3,035mg sodium for the entire dish. Assuming you eat this as the meal itself, without any other dishes, you should be able to feed 6 people from this recipe.

This dish comes out to about 500 mg of sodium per person if you feed 6. Again, this can vary. Please check your labels if sodium is a concern for you!

I also want to add that the whole family enjoyed the meal. Not only did the kids happily eat it, but hubby actually said this was the best broccoli cheese soup he'd ever had. He then instructed me to write down exactly what I did so I don't lose the recipe. Now if only everything I made evoked that sort of response!

Broccoli Cheese Soup
adapted from this recipe from Yammie's Noshery


Disclaimer: Thoughts of Fluff was not compensated for this post. All opinions are my own and may differ from those of your own.
Posted by Christine at 6:00 AM