All About (Reusable) Liners

I'm not talking about disposable liners, as I've never used those before. I'm talking about FLEECE. Bobble had a lot of issues with diaper rash early on, and the last thing I wanted to do was stop using fluff. It was suggested to me, since he had to be on prescription cream (totally not cloth diaper safe!) to switch to disposables. Nope, not doing it. There had to be a way around this!

Then I was probably given the best advice ever. Someone online suggested using liners. I looked up the different liners and about hit the roof. They get pricy! They told me to go to the local fabric store and look for anti-pill fleece. I found some and it was about $8 a yard (NOT on sale). That's doable. I bought one yard, came home, washed it, and started cutting.

Okay, so I'm not the most perfect, crafty person in the world... and I probably SHOULD have used something as a guide instead of just cutting aimlessly. As an end result, my liners are all sorts of different sizes (and shapes!), but you know what? THEY ALL WORK! 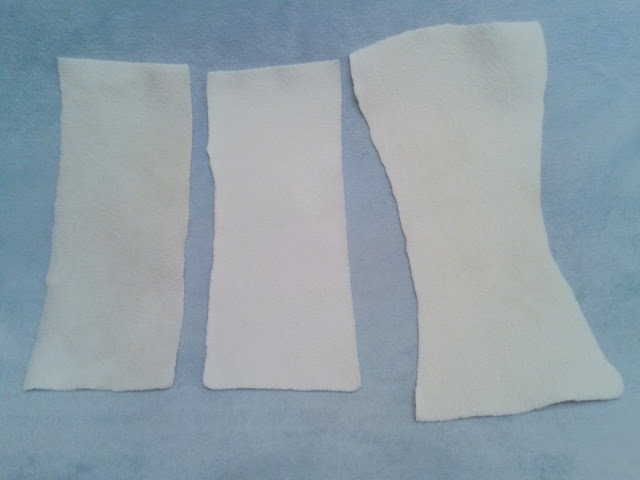 As you can see, none of these 3 are the exact same. The one on the far right I cut to match the shape of our FuzziBunz OS just to see if it worked better than the ones cut in rectangles. It really didn't make a difference, though. Also, you can tell the one on the far left has been used MUCH more than the others from colour, but it still works great!

It works great! They are fleece, so the urine goes through them and still gets absorbed by the diaper, but the creams stay on the liner. We've NEVER had a leak issue from using Rx creams with our fluff because the liners just work so darn well! Best $8 I ever spent!

All you have to do is lay them between baby and the diaper. When you change baby, have a separate wet bag so you can store the liners (and cloth wipes if you're using those while using non-CD safe cream), and just wash those on hot with the towels or something so you don't transfer residues to the diapers while you're getting them clean. Speaking of residue, I noticed when using the creams and when Bobble pooped, the run off from spraying the wipes with the diaper sprayer was very sudsy. Even though it didn't look like there was much cream on the liner, there was. This confirmed that I should store wipes and liners used with these creams separate.... and also to spray them out if I get the chance!


I've also used them when I knew Bobble was expecting a poopy diaper while we are traveling. Most of the poop will be on the liner (depending on how well you cut them to fit the shape of the diaper), and you won't have to worry about staining ... or the fact you might not have a diaper sprayer where you're traveling to!

The other reason we use these liners? Bobble is so sensitive to wetness that he breaks out if he has a prefold or flat against him and he wets it. If we put a liner in there, he doesn't break out. Easy solution to help keep him dry and rash-free!

I've been using these liners for about a year and a half, and they are still going strong! I didn't even cut the entire yard of fabric! I ended up with about 20 - 25 cut liners, and still the amount of fabric (shown below) left over! 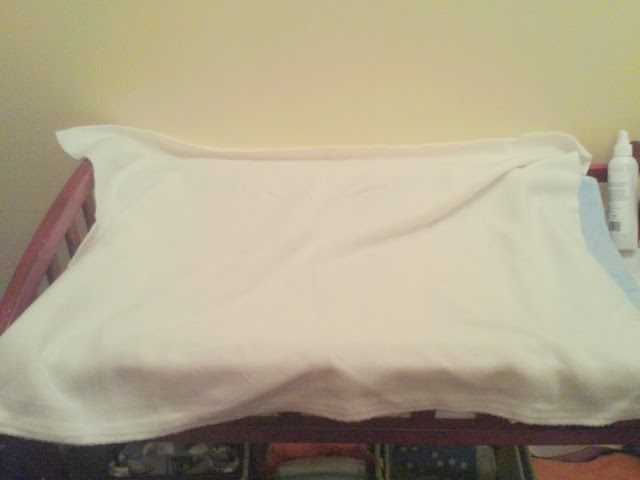 Just look at all that left over fabric! Plenty of liners can still be made out of the left overs from that ONE yard of fabric!

Also, if you're curious, you don't need to sew at all for this. No need to sew the edges or anything, it won't unravel or fall apart. Just wash, cut, use. Yay!
Posted by Christine at 4:27 PM