Recently my family and I have fallen in love with the fruit/veg purees in a disposable squeeze packet available in most grocery stores. However, at $1-$2 a pop they're a bit of a money eater. Solution? Find a reusable container that I can add my own purees to. A quick search online brought me to Silisqueeze:

At $11 each they're a bit pricey but I did the math and realized that in less than 4 weeks we'll be saving quite a bit of money, not to mention sparing the landfill of more waste. I decided to give them a shot.

I purchased a pretty soft orange 4 oz and a cheery apple red 6 oz container. I also purchased a faster flow nipple that the makers state is intended for older children. I wanted a faster flow one just in case my 11 month old got frustrated with the trainer nipple (like most non-spill nipples it requires the child to bite down on the nipple AND suck).

After a few days my products arrived. I got everything as stated but was a little annoyed to see that they individually plastic bagged EVERYTHING. Which meant that each bottle and nipple was in its own plastic bag with its own set of instructions. The extra nipples were also in their own bag with instructions. Three sets of instructions saying the same thing. It was a lot of redundancy and a lot of paper waste. I could excuse the extra nipples but if they sell the 4 and 6 oz as a set why don't they package them as a set?

But nevermind that, businesses do a lot of things I don't understand. The bottles -or “squeeze” if you prefer- were very pretty to look at and very soft to handle. They're very easy to take apart and to reassemble. Cleaning them is a breeze (note: because the nipples are clear silicone they WILL stain over time but their softness does not change). I decided to try the bottles out with my 11 month old using the fast flow nipples so that he would get an immediate reward for sucking on the bottle. I happily filled it up with Greek yogurt and fruit puree and sat back and watched as my little guy CHUGGED it. So far so good.

Putting purees into the bottle is simple because the neck is nice and wide and can accommodate a whole tablespoon, which makes it easy to stir and mix inside the container. I particularly liked that there are ounce markings on the side which makes it easy to portion. When using the lid you will have to push extra hard with your thumbs the first few times because it is stuck on there HARD. The caregivers at my son's daycare were terrified that they would break it.

After having used this for a few weeks I am happy to say that I love this product. It is perfect for what I need. It makes feeding my Bug fruit and yogurt while on the go a snap. I do have a few issues with it, though:

1) The lid does not stop puree from coming out of the nipple. With milk bottles the cap is designed to cover the holes snuggly so that if you flip the bottle upside down no milk comes out. The cap on the Silisqueeze does not. So, if you have the fast flow nipple and you accidentally press on the container, puree will fill the cap making quite a mess.

2) One of the things that made the disposable containers nice is that as your baby sucked on it the container would collapse bringing more of the puree to the nipple. When using the slow flow non-spill nipple you get this to a certain degree, but it doesn't collapse all the way. When using the fast flow nipple your baby will suck in air each time as they try to get the last spoonfuls. We countered this by putting one finger over the hole and shaking down a couple times and then handing it back. Do keep in mind that the fast flow IS intended for older children who will know how to push the puree up and expel the air that way.

3) There is no place to clip the cap when in use so when your child is tipping it back they will inevitably get smacked in the face. I like that the cap is tethered to the nipple but it frustrates my Bug when he gets hit. I may decide to untether it.

Nonetheless, despite these issues, I love this product and would recommend it to anyone. 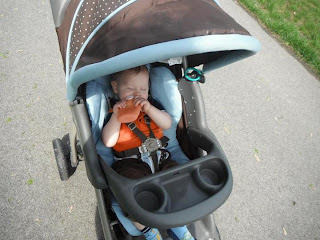 About Bonnie: Bonnie lives in Cincinnati, OH with her husband, 11 month old son, and 3 hyper-active cats. She is an avid advocate of breastfeeding, baby-wearing, and cupcake eating.

Posted by Christine at 7:11 PM

Email ThisBlogThis!Share to TwitterShare to FacebookShare to Pinterest
Labels: feeding