University Games also sent us I SPY Eagle Eye Find-it Game for review. I was super excited about this because I'm sort of awesome at searches (word puzzles, image searches, you name it!) and I knew this would be my sort of game. 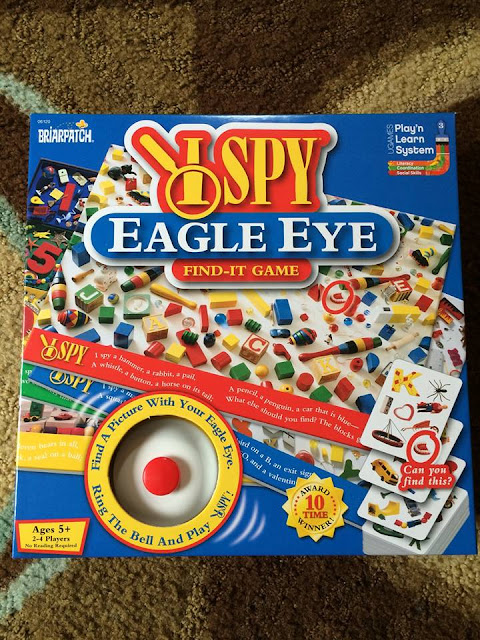 It's a very simple game to explain, there is no reading required to play, and the instructions suggest numerous ways to play including different ways to score and tournament style playing. Since Bobble and Squiggle are so young (5 and 3), I opted to not keep score at all. I mean, let's be honest: I was going to win, right? I figured that I'd just take a few seconds to remind them of the instructions, and take pictures for the review before I started searching. 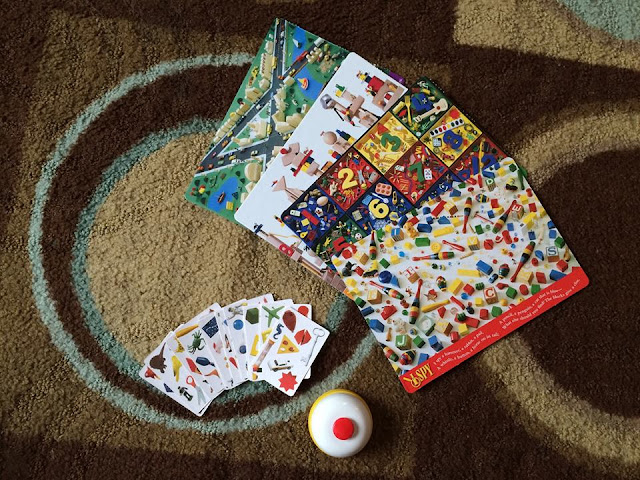 The first time we played, I helped them, explaining that everyone gets one board piece (a big, cardboard card), and everyone gets one little card that has images on it. Each tiny card has 8 tiny pictures on it, but it only has one item on your game board. The game boards are 2-sided, so you technically have 8 boards. There is a bell that you place in the middle and when you find the item on your card on your board, you hit the bell. (If you are keeping score, you hit the bell and yell first; simply hitting the bell would imply you should all switch boards because you couldn't find anything.) 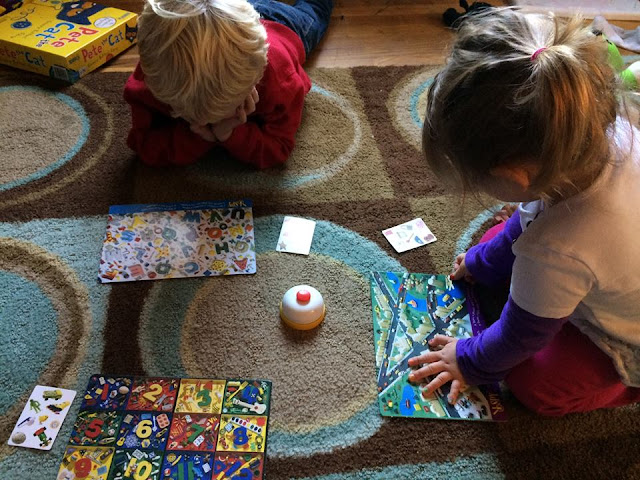 Honestly, I figured my 5 year old would be decent, and my 3 year old would get frustrated. This is because my husband played with us the first time and we quickly learned that there are lots of little "almost" images. By this, I mean the same item as on your card, but tilted a different way (for example, instead of a toy pig on its side, it would be standing upright, or a truck that is identical but a different number). It's actually pretty challenging! 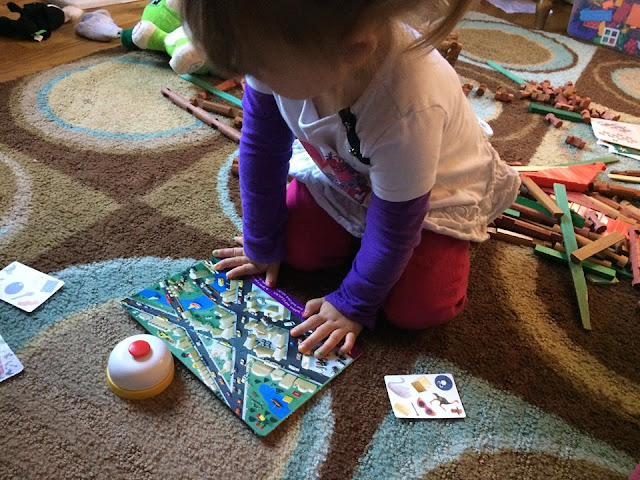 The second time we played was about 2 weeks after first introducing them to the game. Squiggle abandoned her building activities to play, leaving the mess behind her (explaining the background in the pictures). I was a bit cocky in thinking I was going to own them at the game, apparently, because Squiggle (who is only 3, mind you) quickly put me in my place! Look at that smug face! 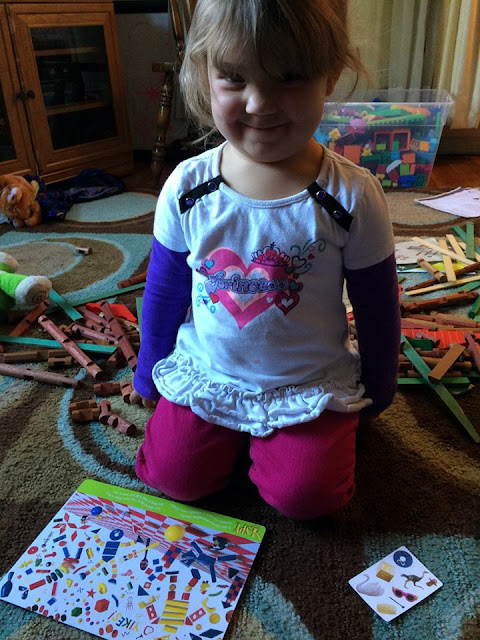 She found the first 3 legitimate items, first try, and very quickly. I thought she was finding near misses, or maybe simply excited to ring the bell. Nope... she was simply ruling the game. I had another image that showed her pointing out what she found on the card and on her board, but I don't want to give anything away, so I opted not to share that one. I will, instead, share an extremely up close image of part of a board to show just how detailed they are. 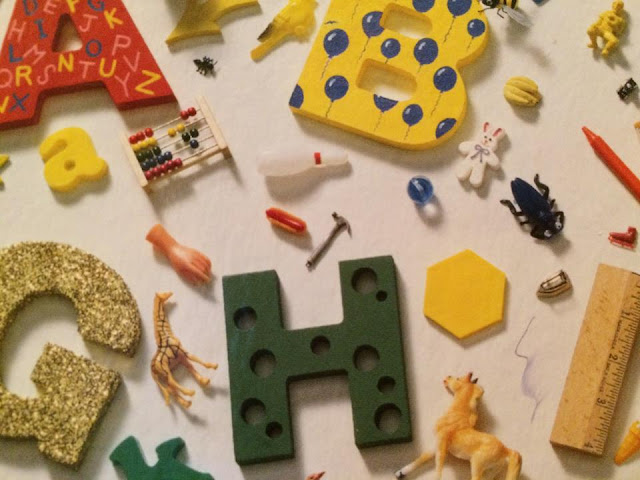 That being said, the game suggests ages 5 and up. I know these are suggestions, but I didn't expect a 3 year old to actually be good at it. I was going to recommend this for kids that were about kindergarten age, but I am now going to suggest that if your child (or the one you are shopping for) has an eye for detail, get the game regardless of age.

Despite only having 8 board images, we have not succeeded in memorizing a single thing. Each board has so much detail and there are so many cards to search off of that we've never played through all of them in one game, and many times we don't even find the items on the card since you get a new card when someone finds an item. It's really set up to keep it challenging for a long time.

You can purchase I SPY: EAGLE EYE for under $20 at Areyougame.com, and at various retail stores. Don't forget to check out Areyougame.com for games to suit all sorts of occasions!

Disclaimer: Thoughts of Fluff is was sent this product in exchange for a review. This did not sway my opinion in any way. All opinions are my own and may differ from those of your own.
Posted by Christine at 6:00 AM